Out of date information, search another

Out of date information, search another

1    NAME OF THE MEDICINAL PRODUCT

•    as adjunctive therapy to beta-blockers,

in the treatment of elevated intra-ocular pressure in:

4.2 Posology and method of administration

When used as monotherapy, the dose is one drop of Bador in the conjunctival sac of each affected eye, three times daily.

When used as adjunctive therapy with an ophthalmic beta-blocker, the dose is one drop of Bador in the conjunctival sac of the affected eye(s), two times daily.

When substituting Bador for another ophthalmic anti-glaucoma agent, discontinue the other agent after proper dosing on one day, and start Bador on the next day.

If more than one topical ophthalmic drug is being used, the drugs should be administered at least ten minutes apart.

Patients should be instructed to avoid allowing the tip of the dispensing container to contact the eye or surrounding structures.

Patients should also be instructed that ocular solutions, if handled improperly, can become contaminated by common bacteria known to cause ocular infections. Serious damage to the eye and subsequent loss of vision may result from using contaminated solutions.

Patients should be informed of the correct handling of the bottles.

1.    Wash your hands and sit or stand comfortably.

3.    Tilt your head back and use your finger to gently pull down the lower eyelid of your affected eye.

4.    Place the tip of the bottle close to, but not touching your eye.

5.    Squeeze the bottle gently so that only one drop goes into your eye, then release the lower eyelid.

6.    Repeat in your other eye if your doctor has told you to do this. 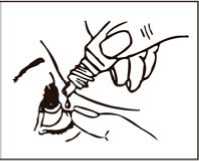 Limited clinical data in paediatric patients with administration of dorzolamide three times a day are available. (For information regarding paediatric dosing see section 5.1).

Bador is contraindicated in patients who are hypersensitive to the active substance or to any of the excipients.

Dorzolamide has not been studied in patients with severe renal impairment (CrCl < 30 ml/min) or with hyperchloraemic acidosis. Because dorzolamide and its metabolites are excreted predominantly by the kidney, Bador is therefore contraindicated in such patients.

4.4 Special warnings and precautions for use

Dorzolamide has not been studied in patients with hepatic impairment and should therefore be used with caution in such patients.

Dorzolamide contains a sulphonamido group, which also occurs in sulphonamides and although administered topically, is absorbed systemically. Therefore the same types of adverse reactions that are attributable to sulphonamides may occur with topical administration. If signs of serious reactions or hypersensitivity occur, discontinue the use of this preparation.

If allergic reactions (e.g. conjunctivitis and eyelid reactions) are observed, discontinuation of treatment should be considered.

Corneal oedemas and irreversible corneal decompensations have been reported in patients with pre-existing chronic corneal defects and/or a history of intra-ocular surgery while using dorzolamide eye drops. Topical dorzolamide should be used with caution in such patients.

Choroidal detachment concomitant with ocular hypotony have been reported after filtration procedures with administration of aqueous suppressant therapies.

Dorzolamide has not been studied in patients less than 36 weeks gestational age and less than 1 week of age. Patients with significant renal tubular immaturity should only receive dorzolamide after careful consideration of the risk benefit balance because of the possible risk of metabolic acidosis.

4.5 Interaction with other medicinal products and other forms of interaction

No specific interaction studies have been performed with dorzolamide.

Dorzolamide is a carbonic anhydrase inhibitor, which, although topically administered, is absorbed systemically. In clinical studies, no disturbances in the acid-base balance occurred during treatment with dorzolamide eye drops. However, such disturbances have been observed with administration of oral carbonic anhydrase inhibitors, leading to interactions in some cases (e.g. toxic effects during high-dose salicylate therapy). Therefore, the potential for such interactions should be considered in patients receiving Bador.

Association between dorzolamide and miotics and adrenergic agonists has not been fully evaluated during glaucoma therapy.

Bador should not be used during pregnancy. There are no adequate clinical data available on exposed pregnant women. In rabbits, dorzolamide resulted in teratogenic effects at maternotoxic doses (see section 5.3).

It is not known whether dorzolamide passes into breast milk. A reduction in body weight gain was observed in the offspring of lactating rats given dorzolamide.

Bador should not be used during lactation.

4.7 Effects on ability to drive and use machines

Possible adverse reactions, such as dizziness and blurred vision, may impair the ability of some patients to drive and/or use machines.

Dorzolamide 2% eye drops solution was evaluated in more than 1,400 individuals in controlled and uncontrolled clinical studies. In long-term studies of 1,108 patients treated with dorzolamide as monotherapy or as adjunctive therapy with an ophthalmic beta-blocker, the most frequent cause of discontinuations from treatment was treatment-related ocular adverse effects in approximately 3% of patients, primarily conjunctivitis and eyelid reactions.

The following adverse reactions have been reported either during clinical trials or during post-marketing experience:

Only limited information is available with regard to human overdose following accidental or deliberate ingestion of dorzolamide. Following oral ingestion, somnolence has been reported; following topical application, nausea, dizziness, headache, fatigue, abnormal dreams and dysphagia have been reported.

Treatment should be symptomatic and supportive. Electrolyte imbalance, development of an acidotic state, and possible central nervous system effects may occur. Serum electrolyte levels (particularly potassium) and blood pH levels should be monitored.

Topically applied beta-adrenergic blocking agents also reduce IOP by decreasing aqueous humor secretion but by a different mechanism of action. Studies have shown that when dorzolamide is added to a topical beta-blocker, additional reduction in IOP is observed; this finding is consistent with the reported additive effects of beta-blockers and oral carbonic anhydrase inhibitors.

In patients with glaucoma or ocular hypertension, the efficacy of dorzolamide given t.i.d. (three times a day) as monotherapy (baseline IOP > 23 mmHg) or given b.i.d. (twice a day) as adjunctive therapy while receiving ophthalmic beta-blockers (baseline IOP > 22 mmHg) was demonstrated in large-scale clinical studies of up to one-year duration. The IOP-lowering effect of dorzolamide as monotherapy and as adjunctive therapy was demonstrated throughout the day and this effect was maintained during long-term administration. Efficacy during long-term monotherapy was similar to betaxolol and slightly less than timolol. When used as adjunctive therapy to ophthalmic beta-blockers, dorzolamide demonstrated additional IOP lowering similar to pilocarpine 2% q.i.d. (four times a day).

A three-month, double-masked, active treatment-controlled, multicentre study was undertaken in 184 (122 for dorzolamide) paediatric patients from one week of age to < 6 years of age with glaucoma or elevated intraocular pressure (baseline IOP > 22 mmHg) to assess the safety of dorzolamide when administered topically t.i.d. (three times a day). Approximately half the patients in both treatment groups were diagnosed with congenital glaucoma; other common aetiologies were Sturge Weber syndrome, iridocorneal mesenchymal dysgenesis, aphakic patients. The distribution by age and treatments in the monotherapy phase was as follows:

If IOP was inadequately controlled on dorzolamide or timolol gel-forming solution monotherapy, a change was made to open-label therapy according to the following: 30 patients < 2 years were switched to concomitant therapy with timolol gel-forming solution 0.25% daily and dorzolamide 2% t.i.d.; 30 patients > 2 years were switched to 2% dorzolamide/0.5% timolol fixed combination b.i.d. (twice a day).

Overall, this study did not reveal additional safety concerns in paediatric patients: approximately 26% (20% in dorzolamide monotherapy) of paediatric patients were observed to experience treatment-related adverse events, the majority of which were local, non-serious ocular effects such as ocular burning and stinging, injection and eye pain. A small percentage, <4%, were observed to have corneal oedema or haze. Local reactions appeared similar in frequency to comparator.

In post-marketing data, metabolic acidosis in the very young particularly with renal immaturity / impairment has been reported.

Unlike oral carbonic anhydrase inhibitors, topical administration of dorzolamide hydrochloride allows for the active substance to exert its effects directly in the eye at substantially lower doses and therefore with less systemic exposure. In clinical trials, this resulted in a reduction in IOP without the acid-base disturbances or alterations in electrolytes characteristic of oral carbonic anhydrase inhibitors.

When topically applied, dorzolamide reaches the systemic circulation. To assess the potential for systemic carbonic anhydrase inhibition following topical administration, active substance and metabolite concentrations in red blood cells (RBCs) and plasma and carbonic anhydrase inhibition in RBCs were measured. Dorzolamide accumulates in RBCs during chronic dosing as a result of selective binding to CA-II while extremely low concentrations of free active substance in plasma are maintained. The parent active substance forms a single N-desethyl metabolite that inhibits CA-II less potently than the parent active substance but also inhibits a less active isoenzyme (CA-I). The metabolite also accumulates in RBCs where it binds primarily to CA-I. Dorzolamide binds moderately to plasma proteins (approximately 33%). Dorzolamide is primarily excreted unchanged in the urine; the metabolite is also excreted in the urine. After dosing ends, dorzolamide washes out of RBCs non-linearly, resulting in a rapid decline of active substance concentration initially, followed by a slower elimination phase with a half-life of about four months.

When dorzolamide was given orally to simulate the maximum systemic exposure after long-term topical ocular administration, steady-state was reached within 13 weeks. At steady-state, there was virtually no free active substance or metabolite in plasma; CA inhibition in RBCs was less than that anticipated to be necessary for a pharmacological effect on renal function or respiration. Similar pharmacokinetic results were observed after chronic topical administration of dorzolamide

However, some elderly patients with renal impairment (estimated CrCl 3060 ml/min) had higher metabolite concentrations in RBCs, but no meaningful differences in carbonic anhydrase inhibition, and no clinically significant systemic adverse effects were directly attributable to this finding.

The main findings in animal studies with dorzolamide hydrochloride administered orally were related to the pharmacological effects of systemic carbonic anhydrase inhibition. Some of these findings were species-specific and/or were a result of metabolic acidosis. In rabbits given maternotoxic doses of dorzolamide associated with metabolic acidosis, malformations of the vertebral bodies were observed.

In clinical studies, patients did not develop signs of metabolic acidosis or serum electrolyte changes that are indicative of systemic CA inhibition. Therefore, it is not expected that the effects noted in animal studies would be observed in patients receiving therapeutic doses of dorzolamide.

Once the bottle is opened, Bador should be used within 28 days maximum.

Keep the bottle in the outer carton, in order to protect from light.

6.5    Nature and contents of container

Bador is available in the following pack sizes:

10 DATE OF REVISION OF THE TEXT