1    NAME OF THE MEDICINAL PRODUCT

The active substance is Budesonide

Treatment and prevention of signs and symptoms of seasonal and perennial allergic rhinitis.

Treatment of signs and symptoms of nasal polyps.

4.2    Posology and method of administration

For nasal use only.

The dosage should be determined individually. The dose should be titrated to the lowest dose at which effective control of symptoms is maintained.

The duration of the therapy with Budesonide nasal spray should be restricted to the period of allergen exposure and depends on the nature and the characteristics of the allergen. For a full therapeutic benefit regular use is essential.

Adults, adolescents and children from 6 years of age:

The recommended initial dose of 256 micrograms may be administered once daily in the morning or divided into two administrations, in the morning and in the evening.

Children should be treated under guidance of an adult.

Treatment of seasonal allergic rhinitis should be initiated, if possible, before the patient is exposed to allergens.

Concomitant therapy may sometimes be necessary to treat the symptoms affecting the eye caused by the allergy.

The desired clinical effect appears within about 1-2 weeks.

Afterwards, the lowest dose should be chosen that keeps the patient just without symptoms. No better efficacy is to be expected with a dose greater than 256 micrograms.

Adults, adolescents and children from 6 years of age:

The recommended dose for the treatment of nasal polyps is 256 micrograms. The dose may be administered once daily in the morning or divided into two administrations, in the morning and in the evening.

Children should be treated under guidance of an adult.

After the desired clinical effect has appeared, the lowest dose should be chosen that keeps the patient without symptoms.

1.    Gently blow your nose to clean the nostrils, if necessary.

3. Hold the bottle as shown in figure 2. Before using Budesonide nasal spray suspension for the first time you must prime the nozzle (i.e. fill it with medicine). Pump the nozzle up and down several times (5-10 times), spraying into the air until an even mist is seen. The priming effect remains for approximately 24 hours. If a longer period of time passes before the next dose is taken, the nozzle must be primed (filled with medicine) again. If Budesonide nasal spray suspension is used at shorter intervals it is sufficient to spray just once into the air. 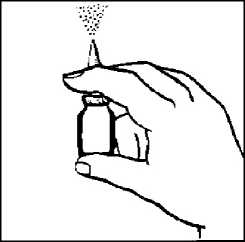 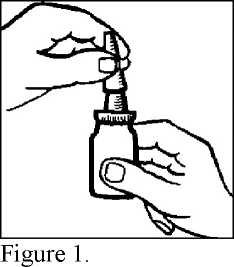 4. Insert the tip of the nozzle into your nostril as shown in figure 3 and spray once (or more if your doctor has told you to). Use the spray into the other nostril in the same way. Note, it is not necessary to breathe in at the same time as you spray. 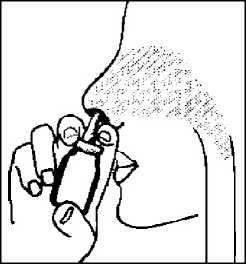 5.    Wipe the nozzle with a clean tissue and replace the protective cap.

6.    Store the bottle in an upright position.

You should clean the plastic nozzle of Budesonide nasal spray suspension regularly, and at any time the spray of medicine is not coming out as it should. If this happens, first check if the nozzle is primed with medicine (see earlier).

If after priming the nozzle again the pump is still not working, clean the nozzle by using the following instructions:

-    Remove the plastic nozzle with a clean tissue and wash in warm - not hot - water.

-    Rinse the nozzle thoroughly, dry it and then replace onto the top of the bottle.

-    Never try to unblock the nozzle by using a pin or other sharp object.

After cleaning the nozzle must be primed (filled with medicine) again before use.

Hypersensitivity to the active substance or to any of the excipients listed in section 6.1.

4.4 Special warnings and precautions for use

Systemic effects of nasal corticosteroids may occur, particularly at high doses prescribed for prolonged periods. These effects are much less likely to occur than with oral corticosteroids and may vary in individual patients and between different corticosteroid preparations. Potential systemic effects may include Cushing’s syndrome, Cushingoid features, adrenal suppression, growth retardation in children and adolescents, cataract, glaucoma and more rarely, a range of psychological or behavioural effects including psychomotor hyperactivity, sleep disorders, anxiety, depression or aggression (particularly in children).

In case of infections of the nose caused by bacteria or fungi, Budesonide nasal spray suspension should be used only if concomitant antibacterial or antifungal treatment is carried out.

In continuous long-term treatment, the nasal mucosa should be inspected regularly e.g. every 6 months.

reduced elimination capacity. However, the intravenous pharmacokinetic of budesonide in healthy volunteers and patients with liver cirrhosis is approximately the same. Consideration of potential systemic effects may be needed in severe impairment of hepatic function.

Budesonide nasal spray is not recommended in patients with epistaxis and in patients, with herpetic infection of oral, nasal or ophthalmic region.

Budesonide nasal spray is not recommended in patients with nasal ulcerations, in cases of recent surgery or nasal trauma until it is fully recovered.

The patient should be informed that the full effect is not achieved until after a few days of treatment. Treatment of seasonal rhinitis should, if possible, start before exposure to the allergens.

Care must be taken while transferring patients from systemic steroid treatment to Budesonide Nasal Spray if there is any reason to suppose that their adrenal function is impaired.

4.5 Interaction with other medicinal products and other forms of interaction

Budesonide has not been observed to interact with any drug used for the treatment of rhinitis.

Raised plasma concentrations of and enhanced effects of corticosteroids have been observed in women also treated with oestrogens and contraceptive steroids, but no effect has been observed with budesonide and concomitant intake of low dose combination oral contraceptives. Because adrenal function may be suppressed, an ACTH stimulation test for diagnosing pituitary insufficiency might show false results (low values).

Results from prospective epidemiological studies and from worldwide post marketing experience indicate no increased risk for overall congenital malformations from the use of inhaled or intranasal budesonide during early pregnancy. Animal studies have shown reproductive toxicity (see section 5.3). The potential risk for humans is unknown. As with other drugs the administration of budesonide during pregnancy requires that the benefits for the mother are weighed against the risks for the foetus.

Budesonide is excreted in breast milk. However, at therapeutic doses of budesonide no effects on the suckling child are anticipated. Budesonide can be used during breast feeding.

In a pharmacokinetic study, the estimated daily infant dose was 0.3% of the daily maternal dose for both dose levels, and the average plasma concentration in infants was estimated to be 1/600th of the concentrations observed in maternal plasma, assuming complete infant oral bioavailability. Budesonide concentrations in infant plasma samples were all less than the limit of quantification.

Based on data from inhaled budesonide and the fact that budesonide exhibits linear PK properties within the therapeutic dosage intervals after nasal, inhaled, oral and rectal administrations, at therapeutic doses of budesonide, exposure to the suckling child is anticipated to be low.

4.7    Effects on ability to drive and use machines

Budesonide nasal spray suspension has no influence on the ability to drive or use machines.

When patients are transferred from systemic corticosteroid (oral or parenteral) to Budesonide nasal spray suspension, undesirable effects outside the nasal area which were previously under control by systemic therapy e.g. allergic conjunctivitis or dermatitis, may become unmasked. They should be treated additionally if needed.

Growth retardation has been reported in children receiving intranasal steroids. Due to the risk of growth retardation in the paediatric population, growth should be monitored as described in section 4.4.

An acute overdose with Budesonide nasal spray suspension is unlikely even if all the sprays contained in the bottle are administered all at once. Administration of doses higher than recommended (see section 4.2) for a longer period (over months) may result in suppression of hypothalamic-pituitary-adrenal axis.

Budesonide is a glucocorticosteroid with a strong topical anti-inflammatory effect on the nasal mucosa and weak systemic effects after topical administration.

Corticosteroids have been shown to have a wide range of inhibitory activities against multiple cell types (e.g., mast cells, eosinophils, neutrophils, macrophages, and lymphocytes) and mediators (e.g., histamine, eicosanoids, leukotrienes, and cytokines) involved in allergic mediated inflammation. They also reduce cytokines, leukotrienes and chemokines (e.g. IL-1 to IL-6, RANTES, TNF-a, IFN-y and GM-CSF) which are secreted by inflammatory cells. Budesonide binds to glucocorticoid receptors resulting in a complex which acts as a transcription factor by either down-regulating proinflammatory mediators or up-regulating anti-inflammatory mediators. There are believed to be approximately 10 - 100 steroid-responsive genes per cell.

The therapeutic efficacy of budesonide Nasal Spray has been evaluated in several thousand adults and children. Most studies were conducted with delivered doses of budesonide of 32 to 256 pg intranasal once daily. Examples of representative studies evaluating the use of budesonide for the treatment of children with seasonal and perennial allergic rhinitis studies are provided below. The primary efficacy variable was the combined nasal symptoms score (CNSS), which is the sum of the individual nasal symptom scores for three nasal symptoms (congestion, runny nose and sneezing, each rated on a scale of 0-3).

A 2-week randomized double-blind, placebo-controlled, parallel-group study evaluated the efficacy and safety of budesonide nasal spray 16, 32 and 64 pg once daily in 400 children (aged 2 to 5 years) with allergic rhinitis (seasonal or perennial). There was a marked reduction from baseline CNSS in all treatment groups, including placebo. The difference between budesonide nasal spray 64 pg and placebo treatment was not statistically significant.

In the recommended dosages budesonide nasal spray does not cause clinical relevant changes in basal plasma cortisol concentrations or to ACTH stimulation. In healthy volunteers a dose dependent suppression of plasma cortisol- and urinary cortisol concentrations were seen after short term administration of budesonide nasal spray.

Budesonide has a volume of distribution of approximately 3 L/kg. Plasma protein binding averages 85 - 90%.

Budesonide undergoes an extensive degree (~90%) of biotransformation on first passage through the liver to metabolites of low glucocorticosteroid activity. The glucocorticosteroid activity of the major metabolites, 6P-hydroxybudesonide and 16a-hydroxyprednisolone, is less than 1 % of that of budesonide. The metabolism of budesonide is primarily mediated by CYP3A, a subfamily of cytochrome P450. Budesonide does not undergo local metabolic inactivation in the nose.

The metabolites are excreted as such or in conjugated form mainly via the kidneys. No intact budesonide has been detected in the urine. Budesonide has a high systemic clearance (approximately 1.2 L/min) and the plasma half-life after iv dosing averages 2-3 hours.

The kinetics of budesonide are dose-proportional at clinically relevant doses. Paediatric population

Budesonide has a systemic clearance of approximately 0.5 L/min in 4-6 years old asthmatic children. Per kg body weight children have a clearance which is approximately 50% greater than in adults. The terminal half-life of budesonide after inhalation is approximately 2.3 hours in asthmatic children. This is about the same as in healthy adults. The Area Under Curve (AUC) after administration of 256 micrograms budesonide from RHINOCORT AQUA is 5.5 nmol*h/L in children, indicating a higher systemic glucocorticosteroid exposure in children than in adults. At clinically recommended doses, the pharmacokinetics of budesonide are dose-proportional and plasma exposure is correlated to the weight of the patient. Therefore this should be taken into account when establishing paediatric doses.

Non-clinical data reveal no special hazard for humans at therapeutic doses based on studies of chronic toxicity, genotoxicity and carcinogenicity.

Glucocorticosteroids including budesonide have produced teratogenic effects in animals, including cleft palate and skeletal abnormalities. Similar effects are considered unlikely to occur in humans at therapeutic doses.

6.5    Nature and contents of container

No special requirements for disposal.

Any unused medicinal product or waste material should be disposed of in accordance with local requirements.